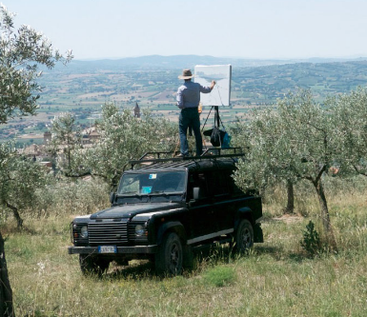 Marc Dalessio was born in Los Angeles in 1972. From the age of 6 to 10 he lived in the Fiji Islands where my father was a regional director of the Peace Corps. The beauty of Fiji and my native California instilled in him a love of the natural world. Marc's foundation in fine art began at the University of California at Santa Cruz where he originally studied biology. The excellent art instructors Patrick Ahern and Hardy Hanson introduced him to plein air landscape painting and academic drawing, respectively. After finishing Phi Beta Kappa in 1992 he moved to Italy and trained at Charles H. Cecil Studios in Florence from 1992 to 1996. Cecil Studios is a traditional painting atelier directly descended, via R. H. Ives Gammell and William Paxton, to the Ecole des Beaux Arts in Paris under Jean-Léon Gérôme. Today the school maintains a rigorous drawing and painting curriculum similar to the Academies of 19th-Century Europe. Cecil taught him the Nietzschean idea of the dichotomy of Apollonian and Dionysian elements in art. The premise is that great art is the result of the merging of strong emotion and passion with analytical precision and dexterous skill, honed through years of monotonous and repetitive study. "During my time in Florence I was also introduced to the writings of the Renaissance Neoplatonists. ‘The Oration on the Dignity of Man” by Giovanni Pico della Mirandola, especially, had a profound influence on me as a young artist."

This short treatise describes God’s creation of man so that “there be some creature to comprehend the significance of so vast an achievement, love its infinite beauty, and stand in awe at its grandeur”. While the literal view on this is that God created man to marvel at God’s work, my art is based on a more secular reading of the text: The artist is nature revering itself. As such, the painter should attempt to avoid developing any personal style in their work. My painting is attempt at letting nature depict itself without overt interference of personality or ego. While aware of the impossibility of such an endeavor, I’ve always felt that an important duty of the poet today is to direct a return to humility towards, reflection on, and study of, the natural world. This return to finding inspiration in the world around us, as well as building a foundation for art based on the observation of nature, are important first steps towards building an environmentally sustainable future for humanity.
We are honored to represent Marc and his wife Tina and to import their fine landscapes and works from France where they currently reside, to our small but strong gallery here in California at VRFA gallery.